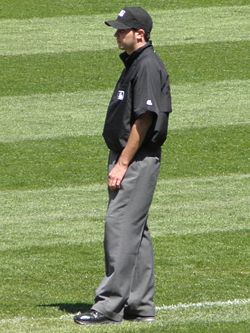 John Tumpane umpired in the Pacific Coast League in 2010. As he umpired Major League spring training games that season, he was eligible to be called up to officiate regular season Major League games should the need arise, which he did for 6 games, the first coming on August 2nd. He began umpiring more regularly in the majors in 2011. He worked the 2013 World Baseball Classic Qualifiers. In 2014, he umpired 138 major league games - the equivalent of a full season.

On June 28, 2017, walking on the Roberto Clemente Bridge near PNC Park before a game in Pittsburgh, PA, he saw a woman climb over the railing. Realizing the woman was suicidal and about to jump into the Allegheny River below, he grabbed her to prevent a fatal outcome, and then was helped by a few passers-by who helped to maintain her in place and talked to her to calm her down until emergency personnel could intervene. He went on to work home plate in the game between the Pittsburgh Pirates and Tampa Bay Rays that evening and shrugged off his heroic act, stating: "I just happened to be there. I think I've been a caring person in my life. I saw somebody in need, and it looked like a situation to obviously insert myself and help out." He did not have any specific training in crisis management or suicide prevention, but his instincts directed him to do the right thing.

On October 12, 2020, he was the home plate umpire for the second game of the ALCS. He received an extremely rare perfect note for his work, as it was evaluated that he had not made the wrong call on a single pitch during the game! On the other side of the scale, he got his name into the news on September 27, 2022 when, as the first base umpire, he called three balks in the span of one at-bat against Miami Marlins pitcher Richard Bleier, tying a major league mark. Bleier had never been called for a balk in seven major league seasons, and became increasingly incensed over the calls, which allowed baserunner Jeff McNeil to score after a two-out single. Tumpane ejected manager Don Mattingly after the third call, and Bleier after he ended the inning and told Tumpane what he thought of his calls.