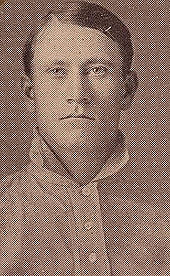 Considered a "Methuselah" because he played for the Brooklyn Superbas for an uninterrupted period of more than a decade, John Hummel was known as the "prince of utility players," appearing in 548 games at second base, 293 in the outfield, 160 at first base, and 74 at shortstop.

Hummel batted .254 and stole 117 bases over the course of his dozen seasons in the majors, but his strength, according to J. C. Kofoed of Baseball Magazine, "is not measured by his hard hitting, nor yet his remarkable fielding or daredevil base stealing:

" 'Versatility' is the one word that sums up the tall Pennsylvanian's worth."

Kofoed wrote that it hardly mattered to Hummel where he played, but that wasn't exactly true; the 5'11, 185 lb. utility man preferred first base, but his teammates thought he was best suited for the outfield.

"Most of all, I would like to get settled in one spot." - the reticent Hummel confided once