"...one of the greatest catchers that ever lived." - Al Spink, writing about John Clapp 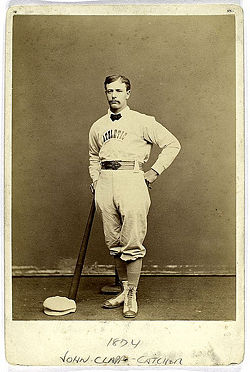 John Clapp was a major leaguer for eleven seasons (counting the National Association) who moved around a lot, playing for eight different teams in that time. As a manager, he had the odd distinction of being a player-manager for six different teams in six different years. He also moved around on the field, playing mostly catcher but appearing a lot in the three outfield positions and occasionally in the infield. He was an above average hitter who drew more than his share of walks. He also umpired 7 games in both 1874 and 1875.

Clapp began in baseball by playing for the amateur Middletown and Ilion teams in 1870. At 20, he was the manager of the Middletown Mansfields in his rookie year, 1872, in the National Association. Of course, the team's average age was 21. The next year, he joined the Philadelphia Athletics. In 1874, he had a career best .732 OPS and went on a European trip with the A's. In the first year of the National League, 1876, John joined the St. Louis Brown Stockings, leading the team in hits (91) and games played, recording a league best 333 putouts at catcher. The following season, he batted .313 while scoring 47 runs in 60 games.

In 1878, John moved to the Indianapolis Blues and managed for the second time, leading the league in games played (63) while riding The Only Nolan to a 24-36 record. Clapp would manage a different team each year from 1878-1883 except in 1882, when he was not in the majors. Rookie Pud Galvin was on the bump for him with the Buffalo Bisons in 1879, a season in which John's 212 consecutive games streak ended, an impressive streak for a position so cruel and unforgiving in the day. He moved to the Cincinnati Stars in 1880, playing a career best 80 games, then led the NL in walks (35) while reuniting with The Only Nolan on the 1881 Cleveland Blues. In 1883, Clapp finished his big league career, letting the young Buck Ewing do most of the catching, while he and John Humphries backed him up for the New York Gothams.

An 1886 New York Times article stated that Clapp, of Ithaca, NY had been ill for a year but was applying for an umpiring job in the International League. He died of apoplexy on December 18, 1904. He was survived by a brother, Aaron, who played for the 1879 Troy Trojans.