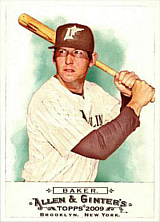 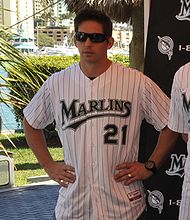 Catcher John Baker was drafted by the Oakland A's in the 4th round of the 2002 amateur draft. He was signed by scout Will Schock and made his pro debut that summer.

Playing for the Chicago Cubs on July 29, 2014, he was the winning pitcher in the longest game in team history, a 16-inning, 4-3 win over the Colorado Rockies that took 6 hours, 27 minutes to complete. Pressed into mound duty in the top of the 16th, he retired Charlie Culberson on a pop-up, then walked Drew Stubbs but got Cristhian Adames, who was playing his first big league game, to hit into an inning-ending double play. He led off the bottom of the inning with a walk against Tyler Matzek and advanced to second on a sacrifice bunt by Emilio Bonifacio; Arismendy Alcantara was hit by a pitch and Anthony Rizzo singled to load the bases before Starlin Castro ended the marathon with a sacrifice fly to right. Baker had never pitched as a professional, but Cubs starter Edwin Jackson had lasted only 4 innings, and the team had already used 7 relievers and most of its bench, including starting pitchers Travis Wood and Jake Arrieta, who both pinch-hit. John retired after playing 17 games for the Tacoma Rainiers, in the Seattle Mariners organization, in 2015. In December, he was hired by the Cubs to work as a baseball operations assistant. He remained with them through 2020, when he was a mental skills coach.

In November 2020, the Pirates hired him to run their minor league system, replacing Larry Broadway.