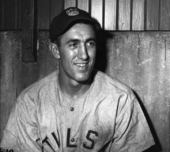 Rullo was born in New York, NY and attended high school in Philadelphia, PA. His minor league career stretched from 1939-53. Although he was primarily a second baseman, he played all over the infield, including at pitcher: as player-manager he sometimes inserted himself into games. He managed 6 seasons in the minors.