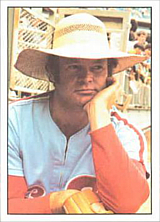 Pitcher Joe Hoerner suffered a heart attack in 1957, but recovered and reached the majors with the Houston Colt .45s in 1963. The lefty pitched in 493 games without a start. His best years were with the St. Louis Cardinals in the late 1960s, including going 4-4, 2.59 with 15 saves for the Cards' World Series-winning 1967 team. He went on to pitch in the majors until the age of 40.

His brother, Bob Hoerner, was an outfielder in the Chicago Cubs organization. His first baseball card appearance came in the 1964 Topps set.

He is not to be confused with his contemporary, Joe Horlen. Both were pitchers with long careers, but Horlen pitched in the American League as a starter while Hoerner was primarily in the National League as a reliever.