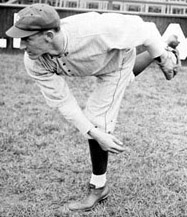 Conzelman was born in Bristol, CT and attended Brown from 1910-1912. The 1912 Brown team went 19-5 under coach Harry Pattee and also included Ed Warner and Ken Nash.

In 1922, the proceedings of the American Society of Civil Engineers state that he was an associate member, living in Birmingham, AL. [1] The Brown University site [2] says Conzelman was inducted into its Hall of Fame in 1971. It states that he had a fastball and a sharp drop ball.

There was also a Joe Conzelman who played for Harvard in the 1950s. Presumably Joe's son, he was named Joseph Harrison Conzelman, Jr., and was a resident of Mountain Brook, AL, a suburb of Birmingham, where the senior Conzelman later died. The son, in addition to being a three-sport athlete at Harvard, was chairman of Southeast Materials Corporation.