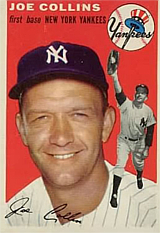 "What I didn't know and what Joe Collins told me later. He said 'You know, when I was on the bench, the guys kept telling me, 'Joe, you want to be in the record book, you're going to get up there five times, and if you strike out again, you're going to go into the book. You're going to be struck out five times in one game in the World Series.' They were giving him the needle because he already had four... Joe knows I'm going to throw him my overhand curveball. He knows that. Because that's what I've been striking him out with. So he's guarding the plate like he has a flyswatter. So I get two strikes on him and waste a pitch and throw him a real good overhand curve, which he barely, barely tapped back to me for the last out." - Carl Erskine, remembering his 14 strikeout day at Ebbets Field in Game 3 of the 1953 World Series and Joe's part in it, to Peter Golenbock, Bums: An Oral History of the Brooklyn Dodgers

At just 16, Joe was invited to a workout with the Cleveland Indians Wilkes-Barre Barons farm club during the 1939 season. For whatever reason, he chose instead to practice that day with the visiting Binghamton Triplets squad, a New York Yankees farm club. Binghamton signed Joe to a Class D contract and he split the year with 14 games for both the Easton Yankees and Butler Yankees. In 1940, he appeared in 99 games with Butler, hitting .320 (122-for-381) with 9 home runs. He spent three more seasons in the minors, establishing himself as a solid contributor, before entering the Naval Air Corps late in 1943, serving in World War II. Joe returned in 1946 to restart his march to the bigs. In 1947, he hit .316 with 23 homers between the Newark Bears and the Birmingham Barons, following with a strong 1948 in which he hit .317 with another 23 home runs for Newark and the Kansas City Blues.

Joe hit four World Series round trippers, all of which led to Yankees victories. This includes the pair he hit in a 6-5 win over the Brooklyn Dodgers in Game 1 of the 1955 World Series. He also homered in the second game of the 1951 Fall Classic against the New York Giants' Larry Jansen and went deep in the opening game of the of the 1953 World Series against Brooklyn to break a 5-5 deadlock in the 7th inning. Collins also gave Yankees fans a scare when he lost Jackie Robinson's pop fly in the Ebbets Field sun, which Billy Martin recovered to catch in a famous game-saving play in the seventh game of the 1952 World Series.

In spring training 1958, the Yanks sold Joe's contract to the Philadelphia Phillies for $20,000. The man Casey Stengel called "my meal ticket" immediately announced his retirement because he wanted to be remembered as a Yankee. At the time of his retirement, the 715 games he had played at first base were second to Lou Gehrig in Yankee history. Joe was later in public relations for People's Express Trucking in Newark, NJ and also represented the Union Center National Bank in Union, NJ. Shortly before his death on August 30, 1989, at 66, he was honored for his many years of community service in the Newark area and a local ball field was named in his honor.