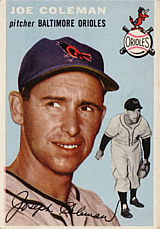 Pitcher Joe Coleman played for the Philadelphia Athletics in 1942 before serving in the Navy during World War II, going through pre-flight training with Ted Williams, Johnny Pesky and Johnny Sain. After the war, he returned and enjoyed three 200 inning seasons with double digit victories. In 1948, he finished 14-13 with 3 shutouts for the A's and earned a save in the All-Star Game. In 1954, he pitched four shutouts and 221 1/3 innings en route to a 13-17, 3.50 season with the inaugural edition of the big league Baltimore Orioles. He later was a batting practice pitcher for the Boston Red Sox in the late 1950s before opening a chain of sporting goods stores in the Boston area. The father of big league pitcher Joe Coleman Jr. and grandfather of big league pitcher Casey Coleman, Joe Sr. died of a brain hemorrhage at age 74.