Note: This page is for pitcher Joseph Colon who made his major league debut in 2016; for others with similar names, click here. 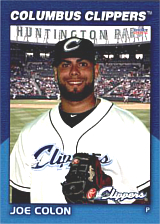 Joe's big league career consisted of 11 relief outings with the Cleveland Indians in 2016. In 10 innings, he posted a 7.20 ERA. On July 1, 2017, he was suspended for the remainder of the season after testing positive for a synthetic form of testosterone. This was his second minor league suspension, popping for 50 games at the start of the '16 season for a drug of abuse. He last pitched in the Mexican League in 2018.