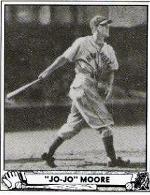 Jo-Jo Moore was a leadoff hitter who had a 12-year career with the New York Giants, mostly during the 1930s. His lifetime average was .298.

Moore was typically the leadoff batter, and the teammates hitting behind him included Mel Ott, Bill Terry, Lefty O'Doul, Travis Jackson and Dick Bartell. Carl Hubbell was among the pitchers on the team.

In spite of all the other big names on the team, Moore was a star in his own right, being named to the All-Star team six times in his nine seasons as a regular.

The most similar player, according to the similarity scores method, is Mickey Rivers from the 1970s and 1980s. However, Mickey was only named to the All-Star team once, so Moore was clearly more prominent in his own time.

Moore was known to be a first-ball hitter, and some opposing managers would fine their pitchers if they threw Moore a strike on the first pitch.

He is listed by Bill James as the # 77 left-fielder of all time.

Moore also played in the minors before and after his major league career, hitting well over .300 a number of times.