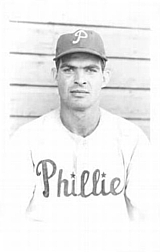 Jim Command, nicknamed "Igor", was signed in 1947 by the Philadelphia Phillies to a contract that a newspaper said made him one the highest paid, first year, Class B players in the country. In 1949, after two seasons with the Salina Blue Jays of the Western Association, he was farmed to the Terre Haute Phillies of the Three-I League, the same league his father, John "Ike" Command, played in 35 years earlier. The elder Command had also been a Golden Gloves boxer.

Jim was a third baseman in the majors for the Phillies in 1954 and 1955, playing 14 games. His first hit was a grand slam, struck at Ebbets Field off Carl Erskine of the Brooklyn Dodgers in the first game of a doubleheader, driving in Earl Torgeson, Granny Hamner and Del Ennis. He also started the second game, doubling in two more runs and accounting for all of his major league RBI. Command later caught Bob Gibson with the Omaha Cardinals and scouted from 1960 to 1994 with the Detroit Tigers. He was the coach at Grand Valley State University from 1971 to 1973 and was inducted to the Grand Rapids Sports Hall of Fame in 1996 alongside President Gerald Ford.