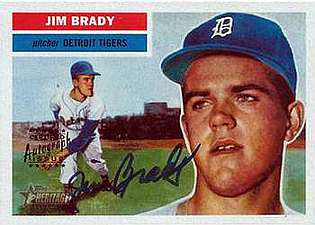 When left-handed pitcher Jim Brady and outfielder Jim Small were signed to large bonus contracts by the Detroit Tigers in 1955, the two became known as the "James Boys," after the nineteenth century outlaw gang, by their veteran teammates who felt they had robbed the organization of a lot of money. "Diamond Jim," as Brady was called, was signed to a $37,500 bonus after his freshman year at Notre Dame. After tearing a tendon in his elbow, he did not pitch at all in 1955. In Brady's inaugural 1956 season, he was banged around for 15 hits, 3 home runs and walked 11 in his six career innings of work as a reliever. He accumulated an astronomical career ERA of 28.42.

In June 1957, his two years of having to remain on the big league roster because of the bonus rule of the day was up. He was sent out to the Augusta Tigers of the Class A South Atlantic League where he was 6-5 with a 3.00 ERA. He then spent 1958 with the Augusta Tigers, the Lancaster (PA) Red Roses and the Birmingham Barons, building a combined record of 4-6 with a 4.19 ERA. The rest of "Diamond Jim's" baseball career, from 1958 through 1961, was spent with three different teams. All told, Brady's minor league career record was 15-18.

After pro baseball, Jim returned to Notre Dame and eventually earned his master's and Ph.D. in the field of education. After several years of teaching at Old Dominion in Norfolk, VA and spending 1970 as baseball coach at ODU, he became the dean of arts and sciences at Jacksonville University where (in 1990) Dr. James Brady became the school's president. He also coached for Team USA when they won Bronze in the 1973 Intercontinental Cup.