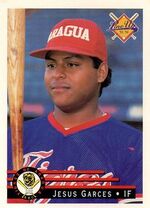 Jesus Garces was a minor league baseball infielder who played from 1989 to 1992 in the Philadelphia Phillies system. He is the brother of Major League Baseball pitcher Rich Garces.[1]

He was signed by the Phillies as a free agent on August 27, 1989. He played in 47 games for the Martinsville Phillies that year, collecting 43 hits in 150 at-bats for a .287 batting average. Although he wasn't much of a hitter overall throughout his career, he did prove to have a good eye at the plate - for example, he walked 28 times in 1989, striking out only 27 times. He also hit the only two home runs of his professional career in 1989.

1991 was an improvement for Garces, although it was still a poor season overall. He spent time with the Clearwater Phillies, Batavia Clippers and Scranton/Wilkes-Barre Red Barons. He played in seven games with Clearwater, 55 games with Batavia and three games with Scranton. Overall that year, he hit a combined .239 in 197 at-bats. He had only five extra base hits overall, four doubles and a triple. He walked 29 times and struck out only 13 times in 1991.

Garces played in only 12 games in 1992, all with the Spartanburg Phillies. In 36 at-bats that year, he collected only two hits for a .056 batting average. He did however walk nine times and strikeout only twice, which was fairly impressive.

After professional baseball, he has served as a scout for the Boston Red Sox [2] and the Detroit Tigers [3] and has coached in the Venezuelan Summer League [4]. He signed Hernan Perez. He has also served as bench coach of the Tigres de Aragua in the Venezuelan League.

This biographical article is missing the person's: full name
Retrieved from "https://www.baseball-reference.com/bpv/index.php?title=Jesus_Garces&oldid=1252464"
Categories: