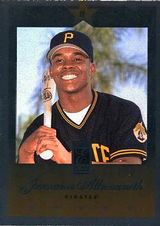 Jermaine Allensworth was the first All-American in Purdue University's 105-year-old baseball program and dubbed by Baseball America the third best prospect entering the 1993 amateur draft. Despite this prediction, he slipped to the 34th overall selection. He played in the majors from 1996 to 1999 and in the minors from 1993-2002. He was the regular center fielder for the Pittsburgh Pirates for parts of three years before being traded midway through the 1998 season. He was having his best year with the bat, hitting .309 at the time.

He is one of nine major leaguers born in Anderson, IN, the most recent of which is Adam Lind. In his second Major League game, Allensworth drove in the winning run in the 9th with a single. Three weeks later, he hit a grand slam. Oddly, the similarity scores method (through 2019) shows the most similar player as one from the 1940s, Carden Gillenwater. Rich Coggins is second most similar.

On the April 12, 1997 edition of Saturday Night Live, Allensworth was portrayed by comedian Tracy Morgan in the recurring sketch "Perspectives".