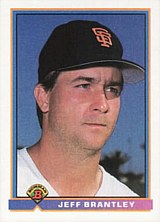 Pitcher Jeff Brantley was signed as a 6th round pick in the 1985 amateur draft by the San Francisco Giants and scout Ken Parker. Almost exclusively a reliever, he was a National League All-Star in 1990 when he posted a sparkling 1.56 ERA and 19 saves in 86 2/3 innings with the Giants. He later earned Rolaids Relief Man honors in 1996, saving an NL best 44 games with a 2.41 ERA for the Cincinnati Reds. In fourteen seasons, he logged 172 saves in 615 appearances. On the hill, he threw a fastball, a slider and a splitter.

Initially a regular on ESPN's Baseball Tonight after his playing days, Brantley became a radio broadcaster for the Reds in 2007.