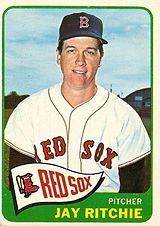 Jay Ritchie spent a few years in the minors before making his big league debut with the Boston Red Sox on August 4, 1964 against the Minnesota Twins with the first batter he faced being Hall of Fame slugger Harmon Killebrew. In four innings pitched that game, he allowed two hits and three walks, but did not allow a single earned run.

In 1967, he tied for 10th in the league with Bob Miller in pitching appearances. While with the Braves that year, he pitched the equivalent of a perfect game and then some, retiring 28 batters in a row over a span of four consecutive outings.

He played his final season in 1968, appearing in 28 games for the Cincinnati Reds, starting two of them. Overall, he posted a 4.61 ERA that year, which was nearly a point and a half higher than the National League average.

As a batter, he hit .200 in 35 at-bats total, with the highlight of his hitting career being a triple he hit off Don Cardwell of the New York Mets on May 16, 1967. It was the only extra-base hit of his career.

Statistically, according to Baseball-Reference.com and using the similarity scores method, Ritchie is most similar to pitcher Evan Meek (as of January 2016).

He also scouted for the Braves.