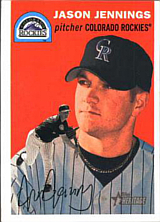 Jason Jennings was a pitcher for nine major league seasons.

He was a first team college All-American at both pitcher and designated hitter at Baylor University. In the 1997 Intercontinental Cup, Jennings pitched one scoreless inning as the least-used US hurler. He was a two-way player for Team USA in the 1998 Baseball World Cup, with a 1-0, 1.17 record in the qualifying tournament. In the Cup itself, he was 0-1 with a 4.76 ERA, getting roughed up by Nicaragua in his only start. He played one game at DH, striking out in both at-bats. He was a first-round selection by the Colorado Rockies in the 1999 amateur draft, going 16th overall.

He is the only pitcher in major league history to pitch a shutout and hit a home run in his major league debut. In Jennings' first 12 days as a major leaguer, he picked up three wins on the road on his way to a 4-1 record in 2001. He followed that up with an excellent rookie season in 2002, when he went 16-8, 4.52 in 32 starts for the Rockies. He was voted the winner of the 2002 National League Rookie of the Year Award, beating out Brad Wilkerson for the honor. However, he never had another winning season after that, although he was still a valuable pitcher, twice topping 200 innings (in 2004 and 2006).

Jennings was traded to the Houston Astros before the 2007 season, in a deal that saw Taylor Buchholz, Jason Hirsh and Willy Taveras head to Colorado. He underwent surgery to repair a torn flexor tendon in his right elbow on August 30th, ending his season with a disappointing record of 2-9, 6.45. He returned to action in 2008, appearing in six games for the Texas Rangers with a record of 0-5, 8.56. He also pitched for them in 2009, but his career came to an end after going 2-4, 4.13 in 44 games as a reliever. Before that final season, he had made 181 appearances in the major leagues - 180 of them as a starter.