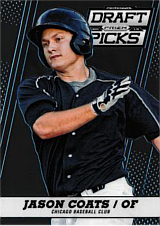 On March 10, 2016, during spring training with the White Sox, he was in the middle of two rare plays in the same game against the Kansas City Royals: in the 5th inning, he started a 7-6-3 triple play by catching a line drive off the bat of Tony Cruz, then in the 7th, a line drive hit by Drew Butera tipped off his glove and turned into an inside-the-park home run. Coats made his big league debut in June, batting .200/.298/.340 in 50 at bats with a home run and four RBI. In January 2017, he was claimed on waivers by the Tampa Bay Rays and almost immediately released after tearing his right UCL. He was lured back into their organization to play in 2018, playing two seasons with the Durham Bulls before becoming a minor league free agent.