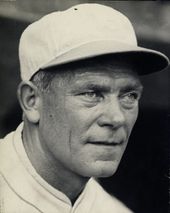 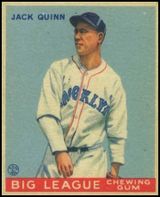 Jack Quinn of the Philadelphia Athletics is still the oldest player to hit a home run in the American League, with a blast in 1930. Julio Franco has since taken the major league record. He also is the oldest player to get more than one hit in a season, having had 4 in 1932. These feats are even more special considering he was a pitcher.

Quinn can reasonably be described as the oldest regular player in major league history. His last game was two days after his 50th birthday: he is one of six players in major league history to play a game after age 50. The others are Satchel Paige, Nick Altrock, Minnie Minoso, Jim O'Rourke and Charley O'Leary. However, each of those five played five games or fewer after their 48th birthday, and each missed at least ten of the seasons between age 40 and his final game. Quinn and Hoyt Wilhelm are the only players with at least ten games in the season of their fiftieth birthday: in fact, Quinn and Wilhelm both played at least ten games every season from age 35 to their retirements.

Quinn was one of the last legal spitballers. The year after he retired, the last pitcher allowed to use a spitball (Burleigh Grimes) called it quits.

Quinn was long thought to be a native of Pennsylvania, where he grew up. Research conducted in 2007 indicated that he was in fact born in Austria-Hungary and that the name Picus is a phonetic transcription of his original family name, Pajkos. He was of Slovakian origin. His mother died in 1884, shortly after the family arrived in America. His father worked in the coal mines near Hazleton, PA and remarried. Quinn probably did not know the exact circumstances of his birth himself and various stories circulated about his origins. He began working in the coal mines himself when he was 12, circumventing child labor laws by lying about his age, and later was a blacksmith after a mine fire almost cost him his life. However, he was unsatisfied with these dangerous and unhealthy occupations and wanted to play baseball, so late in his teenage years, he hopped a train and headed west, ending up in Montana for a time. He returned to Pennsylvania around 1900 and began playing semi-pro baseball. He could always throw harder than the average, but really became a top professional pitcher when he mastered his version of the spitball.