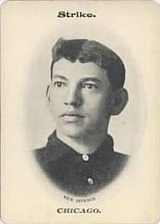 Nick Altrock was involved in big league baseball for more than fifty years as a player and coach but is best remembered as a baseball clown and comedian extraordinaire. 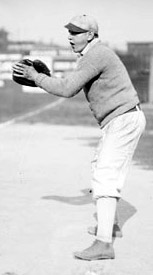 After a stint in the majors with the 1898 Louisville Colonels, Altrock played with the Milwaukee Brewers in the American Association in 1902. On August 3rd, he pitched both ends of a doubleheader, beating John Suthott of Indianapolis 6-2 in the opener before falling to Frank Killen by a 3-0 score in the second game. Altrock walked only one batter in the two games.

After briefly playing with the Boston Americans, Altrock was sold to the Chicago White Sox in 1903. He played sparingly his first year with the Sox before joining the team's rotation in 1904. He won 19 games in 1904 and 23 games in 1905, throwing 31 complete games in each year. In 1906, he notched 20 wins as the Sox won the American League crown. In that year's World Series, he made two starts and hurled two complete games, allowing just 1 earned run as the Sox won the world championships in seven games.

Altrock was injured after the 1906 season and played sparingly thereafter, never again posting a winning record in the majors. In 1907, he worked one game as a fill-in umpire. He was traded to the Washington Senators in 1909, and his playing career was effectively over at the end of that season. However, he subsequently joined Washington's coaching staff, and starting in 1912 made occasional appearances on the mound, usually no more than once per season, and more or less as a good-natured publicity stunt. But in 1918, with many players gone from the team due to military conscription, 42-year-old Altrock pitched in five games, with a record of 1-2. These were his last decisions as a major leaguer. After a long layoff, Altrock pitched again for the Senators in 1924. He made his final plate appearance in 1933 as a 57 year old pinch-hitter.

Along with Minnie Minoso, Altrock is the only player to appear in a game in five different decades. He is one of six players in major league history to play a game after age 50. The others are Satchel Paige, Minnie Minoso, Jim O'Rourke, Charley O'Leary and Jack Quinn.

Altrock became a Senators coach in 1912 and remained on their staff until 1953.

One of the game's great comedians, Altrock did physical comedy routines in the third base coach's box to distract and amuse the opposing pitcher. American League president Ban Johnson heard of it and attended a game to investigate. Altrock later said he did his one-man wrestling match routine, and had the crowd roaring - Johnson louder than any of them. Johnson liked the comedy, but still ordered Altrock to squash the on-field routine.