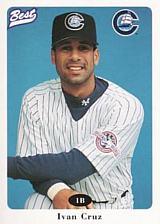 Originally drafted by the Detroit Tigers in the 28th round (730th overall) in 1989 amateur draft, Cruz was a slugging first baseman who had the misfortune of being stuck behind Cecil Fielder with the Tigers, Tino Martinez with the Yankees and Albert Pujols with the Cardinals. His best chance to play came in 1999 with the Pittsburgh Pirates. Unfortunately, after only 5 games of pinch hitting and backing up Kevin Young, injuries sent him to the disabled list. Overall, Iván had cups of coffee with three teams and batted .273/.310/.400 with two homers in 55 at bats. He also played professionally in Mexico and with the Hanshin Tigers and Chunichi Dragons in Japan, slugging 25 home runs in parts of two seasons.

Cruz returned to baseball as manager of the AZL Padres in 2010. In 2011 and 2012, he was the team's hitting coach. He moved to the Eugene Emeralds as hitting coach in 2013. In 2014, he was a coach for the Gwinnett Braves to begin the year, then the hitting coach of the Danville Braves when the short-season league began. He coached Danville from 2015-2016 and the Mississippi Braves in 2017.

Where are they now