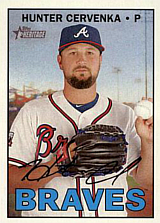 Pitcher Hunter Cervenka came a long way since going 2-10 with a 7.93 ERA in the low minors in the Boston Red Sox system in 2011. He was traded to the Chicago Cubs as the player to be named later in a deal that initially took place on April 21, 2012 - the Red Sox sent Michael Bowden and Cervenka to Chicago for Marlon Byrd. The Cubs released him in 2015, the Atlanta Braves signed him, and by 2016, he was a major leaguer, being called up in early April after John Gant was roughed up in his first few appearances. He had a very short major league debut; on April 12th, he replaced starter Jhoulys Chacin to start the 7th inning in a scoreless game against the Washington Nationals but allowed a single to the only batter he faced, Daniel Murphy, and was immediately replaced by Chris Withrow. He came back to record his first two career outs the next day. Hunter made 73 appearances in the bigs, 68 of them in a split-season in 2016 between Atlanta and Miami. A LOOGY, he had a 4.69 ERA in 48 innings.