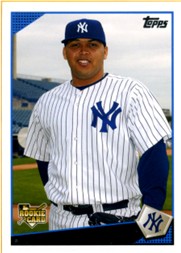 Although born in the Dominican Republic, pitcher Humberto Sanchez grew up in the Bronx and attended South Bronx High School. He was selected out of high school by the Los Angeles Dodgers in the 9th round of the 2000 amateur draft but chose to attend junior college instead. He was chosen by the Detroit Tigers in the following year's draft and played for Connors State College in Oklahoma as a draft-and-follow. His 8-1 record coupled with a 1.17 ERA prompted the Tigers and scout Rob Guzik to sign him in May 2002. He made his debut that summer, starting 9 games for the Oneonta Tigers of the New York-Penn League.

Used almost exclusively as a starter, Sanchez had control problems early in his career, but put everything together in 2006, posting a 10-6 record, a 2.63 ERA and 129 Ks in 20 starts between the AA Erie Sea Wolves and AAA Toledo Mud Hens. He started the 2006 Futures Game for the World Team, but his year ended in early August when he was placed on the disabled list with an inflamed right elbow, costing him a call-up to the major leagues. He missed all of 2007 but was still traded to the New York Yankees as one of three players sent in return of Gary Sheffield after the 2007 season. He next pitched in the Yankees' organization late in the 2008 season, making a number of very brief rehabilitation starts for the GCL Yankees, only notching 11.2 innings of work in 12 games, including 9 starts. He then made three other short appearances on the mound for the Tampa Yankees and Trenton Thunder before he was sent in to pitch at Yankee Stadium, facing the first-place Chicago White Sox on September 18, 2008. He had pitched fewer than 15 professional innings over the previous two seasons, but the big righthander still managed to retire the side in order, registering his first strikeout in the process.