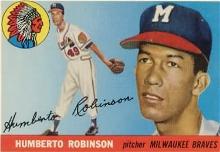 Coming to the majors in 1955, Humberto Robinson was considered the first Panamanian-born major leaguer, although Hector Lopez and Webbo Clarke followed the same season. However, when the Negro Leagues were given MLB status retroactively in 2020, he lost his honor - Victor Greenidge had played in 1941. Humberto made the game of baseball proud in 1959 when he refused to accept a bribe to fix a game. At the time, the 6' 1", 155-pound string bean righthander with the good curve ball was on the Philadelphia Phillies staff when he was approached by one Harold "Boomie" Friedman, a former operator of a Philadelphia night spot. Friedman reportedly offered Humberto $1,500 to throw the September 22nd game against the Cincinnati Redlegs, forty years after a group of "Black Sox" had thrown the World Series against the Cincinnati Reds.

Humberto, who maintains the "bribe was $300," honorably would not accept the offer which was made at a hotel the day before the game. "I didn't want to talk about it," said Robinson. But he let the cat out of the bag when he told his teammate Ruben Gomez, who advised him to report the situation to manager Eddie Sawyer. The lanky Panamanian remained mute but Gomez went to Sawyer in the 5th inning of the said game. Robinson was lifted for a pinch-hitter in the 7th and the Phils went on to win, 3-2.

The bribe was reported to the police and Friedman was arrested. He was convicted after a one-day trial on June 28, 1960 and sentenced to two to five years in prison. The 42-year-old defendant had said he was not trying to fix the game with the Redlegs, but merely offering to lend Robinson money. Michael von Moschzisker, Friedman's attorney, claimed that since Robinson had won only one game, there would be no sense in trying to fix it. He then observed that the sentence would better fit "a man who tried to fix the Army-Navy football game or the World Series." Juge Ethan Allen Doty retorted: "All of our youth look to this National Pastime. All look to the integrity and all out effort to win in all ballplayers."

Robinson, whose 102-game major league career ran between 1955 and 1960 with the Milwaukee Braves, Cleveland Indians and Philadelphia Phillies, went 8-13 with a 3.25 ERA. Humberto had great success in the minors as a starter in 1954 with the Jacksonville Braves when he led the South Atlantic League with 23 victories, 243 strikeouts and a 2.40 ERA. In 1955 he led the American Association in winning percentage with a 14-4 record for the Toledo Mud Hens and led the International League in wins with 18, pitching for the Toronto Maple Leafs the entire 1957 season. Overall he spent ten years (1951-1962) in the minors, had only one losing season and finished up with a 122-68 record with a 3.05 ERA.

After baseball Humberto worked in construction for many years in Brooklyn, NY, and died in a nursing home there in 2009, after suffering for a long time with Alzheimer's Disease.