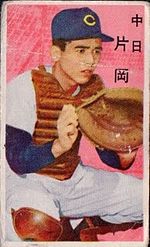 Kataoka debuted in 1959 with the Chunichi Dragons, going 0 for 1 with a walk. He was 0 for 3 in 1960. He suffered from a panic disorder that caused his hands to be paralyzed under stress; as a result, Chunichi let him go. His college coach Kuninobu Sunaoshi was then managing the Kokutetsu Swallows and Sunaoshi convinced the club to sign Kataoka. He was 2 for 7 in 1961 and 0 for 1 in 1962 to end his career with a total of 13 plate appearances in 29 games (he presumably was a defensive sub primarily). He later worked for the Sankei Shimbun, was a spokesman for the Sankei Swallows and scouted for the Swallows.