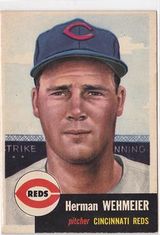 At the age of 18, right-hander Herm Wehmeier was signed as an amateur free agent by the Cincinnati Reds before the 1945 season. He was assigned to the AA Syracuse Chiefs of the International League and went 4-8 his first year out. He also made two appearances for the Cincinnati club, losing his only decision. Herm spent 1946 with the Columbia Reds of the class A South Atlantic League, going 17-6 with a 3.53 ERA and in 1947 he was back with the Syracuse Chiefs, who were now a AAA club. He won 15 and lost only 8 with a 4.12 ERA. Herm went to Cincinnati for one inning in 1947 and would be a major leaguer for the rest of his career.

Wehmeier was an outstanding high school athlete in Cincinnati, OH who turned down several scholarship offers to play college football when he signed with his hometown Cincinnati Reds in 1945. He was a fixture in their starting rotation from 1948 to 1952, but struggled with his control, leading the National League in walks three times - in 1949, 1950 and 1952. After a winning record of 11-8 despite an ERA of 5.79 in 1948, he lost more than he won for each of the next five years before finally escaping the boos at Crosley Field when he was traded to the Philadelphia Phillies in 1954.

He won 10 games for Philadelphia in 1954 and 1955 but again had losing records. In 1955, he threw 16 consecutive scoreless innings in a pair of starts against the Milwaukee Braves. In an off-hand remark Hank Aaron referred to Wehmeier as "my worst nightmare." (In his career, Aaron would hit .236 against Wehmeier in 55 at bats - though he did hit 4 home runs off him over the years.)

After losing his first two decisions for the Phillies in 1956, Herm was traded to the St. Louis Cardinals and for the first time in eight years had a winning record at 12-11. On the penultimate day of the season he spoiled the Braves' pennant hopes. With Milwaukee and the Brooklyn Dodgers tied for first place, he out-dueled Warren Spahn, 2-1, in 12 innings.

Wehmeier was named as the Opening Day starter for the Cardinals in 1957 and beat his old team, the Redlegs, back in Crosley Field. Herm finished the year 10-7 and at age 30 was developing into a much improved pitcher. But after three appearances with the Cards in 1958 and another seven with the Detroit Tigers that same year, he suffered an elbow injury that ended his career at age 31 at 92-108.

From 1959 to 1961 Wehmeier scouted for the Cincinnati organization and recommended the team sign Pete Rose, who like Herm, had attended Western Hills High School in Cincinnati.

After baseball, Herm entered the trucking business and was the general manager of the ABC Freight Forwarding Company in Dallas, TX, where he suffered a fatal heart attack while testifying at a fellow employee's embezzlement trial on May 21, 1973 and died at the age of 46.

Wehmeier's son, Jeff Wehmeier, was selected by the Chicago Cubs in the first round of the 1971 amateur draft.