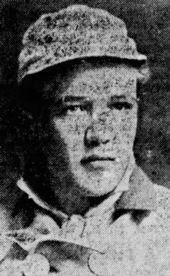 Herbert Jackson started two games for the Detroit Tigers in 1905. He went 0-2 with a 5.73 earned run average in 11 innings pitched. In the previous season, he had a record of 26-8 for the Fort Worth Panthers in the Class C Texas League

Jackson was listed incorrectly in earlier encyclopedias as Charles Bernard Jackson, but contemporary accounts clearly state that he was Herbert Jackson from Ithaca, NY He lived in Binghamton, NY for a time, married Winifred Allison in 1914, and was living in Elyria, OH when he registered for the draft during World War I. He was still living there at the time of the 1920 census, but moved to Carnegie, PA shortly thereafter, at which point his trail disappeared. Because of a Pennsylvania law which made it almost impossible for outsiders to obtain birth or death records of even long-dead persons, no information about Herbert's later years was known. However, under pressure from genealogists, Pennsylvania eased its restrictions in 2011. This allowed SABR researchers to look for a number of former ballplayers from the state in a newly published death index. Jackson was one of the first finds, as there is a death listing for him in Carnegie in 1922. His obituary in the local paper states that he had moved to Pennsylvania with his mother and that she had died a mere three weeks before him. Herbert had gone to visit his doctor and dropped dead suddenly in his office. He was only 38.