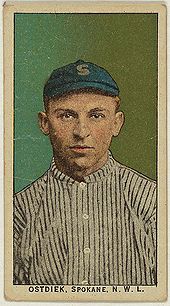 Harry Ostdiek played in the majors in 1904, with the Cleveland Naps and 1908, with the Boston Red Sox.

Harry was born in Ottumwa, IA in 1881. The only other major leaguer born in Iowa that year was Buster Brown.

Harry played for the Fort Wayne Railroaders in 1903 and 1904, and made his major league debut in September 1904. He was in 7 games for the Naps, a team which finished 86-65. The other catchers on the team were all around 30: Harry Bemis, Fred Abbott and Fritz Buelow. Ostdiek had about the same batting average as Abbott and Buelow did that year.

In 1908 he came back to the majors with the Red Sox for one game on October 7th.