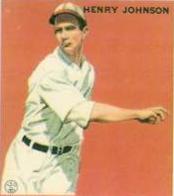 When he first came up to the majors, Johnson was the youngest player on the 1925 Yankees. He pitched in 24 games but then spent virtually all of 1926 and all of 1927 in the minors, missing a chance to play in the World Series.

He finished in the minors in 1943 with Memphis.