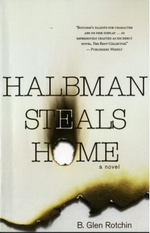 Halbman Steals Home is a novel by B. Glen Rotchin, originally published in 2012. The novel tells the life story of Mort Halbman, a Jewish businessman from Montreal, QC who made his money in the garment industry. It is set in the late 2000s, when Mort feels his life spiraling down after his wife has left him (and kept the mansion that was his pride and joy). His two children are estranged: his son Jackie, named after Jackie Robinson, is about to contract a gay marriage, and his daughter, nicknamed Rusty after Rusty Staub, has married into a Hassidic family and adopted the strictures of the group. But most importantly, his beloved Montreal Expos have left town, leaving him in mourning. His love of baseball has been life-long, as he used to catch games of the Montreal Royals at the old Delorimier Downs as a kid.

Halbman built his house in 1969 in the posh Hampstead neighborhood, the Expos' first season, and its construction, which he closely supervised, was tinged with the optimism of the time... but the house now lies in ruins, burnt to the ground in a recent blaze. He had a few close friends with whom he would hang out at Jarry Park and later at Olympic Stadium, and was with them in the stands on the infamous "Blue Monday", when Rick Monday's 9th-inning home run off Steve Rogers in Game 5 of the 1981 NLCS denied the Expos a shot at playing in the World Series - the game is described in full detail. Things started to slowly fall apart from that point on, as they did for the team, leaving him in his current state of depression. But taking inspiration from a play that defined the great Jackie Robinson, he attempts a daring move - a steal of home - to redeem himself in the eyes of his children.