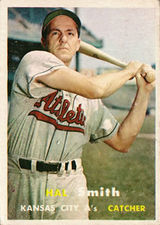 Hal Smith played ten seasons in the major leagues from 1955 to 1964, primarily as a catcher, although he saw significant playing time at third base as well. He is easily confused with another Hal Smith, his contemporary with whom he bore a striking age, MLB longevity and physical resemblance, also a catcher who was in the majors during the same time period.

A high school football star, Smith was offered multiple football scholarships but opted for a baseball career instead, signing with the New York Yankees in 1949. He hit .363 with the Newark Yankees of the Ohio-Indiana League in 1950 and led the American Association with a .350 average while playing for the Columbus Red Birds in 1954. However, with Yogi Berra firmly entrenched behind the plate in New York, there was no place for him in the majors. That fall, after six seasons in the minors, he was part of the largest trade in baseball history in 1954, going to the Baltimore Orioles as 17 players changed teams.

Smith reached the majors in 1955 as the Orioles Opening Day catcher, and was the club's primary backstop as a rookie, hitting .271 with only 21 strikeouts in 135 games. In August of the following year, he was traded to the Kansas City Athletics for Joe Ginsberg. He had one of his best seasons at the plate in 1957, hitting .303 with 13 home runs and slugging .483, 101 points above the league slugging average as Kansas City's regular catcher. The next two years, Smith played a lot of third base, as the A's tried to keep his bat in the lineup when he wasn't behind the plate.

Following the 1959 season, Smith was dealt to the Pittsburgh Pirates. He was part of a very effective catching platoon in 1960 with Smoky Burgess, with Burgess starting against right-handed pitchers and Smith facing the left-handers. Smith batted .295 and Burgess batted .294, and together, they combined for 18 home runs and 84 RBIs. Smith had back-to-back two-homer games against the Los Angeles Dodgers at the Los Angeles Memorial Coliseum on July 20th and July 21st. During the regular season, he slugged .508 and hit 11 homers. In the 1960 World Series, he started 2 games - those pitched by Yankees left-hander Whitey Ford. He entered Game Seven of the Series in the top of the eighth inning as a replacement for Burgess behind the plate after the notoriously slow Burgess was removed for a pinch-runner. His only at-bat of that game occurred in the bottom of the eighth with two outs, two Pirate runners on base and the Yankees leading 7-6. On a 2-2 pitch from reliever Jim Coates, he stunned the Yankees and the Forbes Field crowd with a long three-run home run over the left field wall, turning a 7-6 deficit into an immediate 9-7 lead. The appreciative roar of the fans was prolonged and deafening as Smith became their instant hero. However, the game took another turn when the Yankees scored twice in the top of the ninth inning to tie the game 9-9. Bill Mazeroski's memorable home run in the bottom of the ninth eventually won the World Series for the Pirates, 10-9, but Smith's game-changing home run remains one of the most memorable hits in the history of the Pirates franchise.

After a disappointing 1961 season, in which he batted just .223 with 3 home runs, Smith was selected by the newly created Houston Colt .45s in the expansion draft. He was Houston's primary catcher in 1962, hitting .235 with 12 homers in 109 games (including the second home run in team history, in the club's first game). He then spent the majority of the next season in the minors, appearing in only 31 games for Houston. In 1964 he finished out his major league career on the Cincinnati Reds.

Away from the diamond, Smith was a talented musician, and after his baseball career, he was a salesman for a steel company and a restaurant owner. He was the uncle of major league Tim Flannery, the son of his sister Joyce. Smith died in early 2020 at age 89.