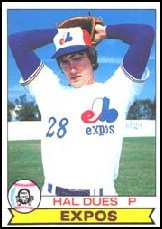 Hal Dues pitched three years for the Montreal Expos. In the year when he had the most appearances, his 1978 rookie season, he posted an excellent 2.36 ERA in 25 appearances, of which 12 were starts, but then saw his career derailed by an arm injury.

Hal was born in La Marque, TX, southeast of Houston, TX. He attended Dickinson (TX) High School and the University of Mary Hardin-Baylor and began pitching in the minors at age 19. He was scouted by Red Murff and signed as an undrafted free agent. He came up on the Expos' radar when he went 12-10 with an excellent 2.06 ERA in 24 starts for the West Palm Beach Expos in 1976. He spent most of 1977 with the Quebec Metros in the AA Eastern League before making his big league debut with the Expos in September, at the same time as Dan Schatzeder. He appeared in 6 games, of which four were starts. He got a win in his very first appearance, against the Pittsburgh Pirates on September 9th, pitching 6 innings and giving up just 1 run. Three of his 6 appearances in the bigs were against the Philadelphia Phillies, who won a division title with 101 victories.

Considered the top pitching prospect in the organization, he was up in the majors during all of 1978, but suffered two different arm injuries, and underwent surgery before the season ended. The Expos did try to treat him with kid gloves, as he pitched only twice in April, then was mainly used in long relief and for the occasional spot start before joining the starting rotation in late June. He impressed with a complete game, 8-1 win over the Phillies in the second game of a doubleheader on July 8th, but had to leave a start on July 24th after dealing shutout ball for 6 innings against the Houston Astros, and he only made one more start before being shut down for good at the end of August. Before that final start, against the Los Angeles Dodgers on August 29th, he had lowered his ERA to 2.10, but he allowed 4 runs in 4 2/3 innings to be charged with a loss and finish the year at 2.36.

The following year, 1979, he continued to have injuries and only pitched in the minors, for a total of 12 games. Before the 1980 season, he was bit on the leg by a dog, and that interfered with spring training. He was sent to the minors, and made 16 starts for the Denver Bears, going 7-4, 3.40. The Bears were one of the great minor league teams of the decade, led by a young Tim Raines as well as Tim Wallach and went 92-44. They played in a park very favorable to hitters, so Hal's ERA was the second-best among the team's starters, behind only Bill Gullickson who graduated to the Expos in June and had an excellent rookie season in Montreal. In Dues' case, he was called up in August, but was hardly used on a team battling for a division title. It did not help that his first start, against the Chicago Cubs in the second game of a doubleheader on August 9th, was a mediocre one (3 R in 4 1/3 innings), and he then suffered a loss in his next outing, in relief against the St. Louis Cardinals on August 14th. Manager Dick Williams quickly made up his mind that Dues was not someone who would help him win games, and only used him four more times after that, all in relief.

He was in the running for a spot as a starter with the Expos in 1981, but two other young pitchers, Gullickson and Charlie Lea, had vaulted past him on the depth chart, not to mention Scott Sanderson, who had in effect taken over his rotation spot when he was first injured in 1978 and was now a fixture on the team. When the Expos signed free agent Ray Burris early in spring training, there was no room left for Hal, and he was sent to the minors where he suffered more injuries. He also pitched in the minors in 1982, but retired before the 1983 season.

Articles of the time tended to refer to him as a hard-luck hurler who was dogged by numerous injuries. His 5-6 record in 1978 certainly did not reflect how well he had pitched.

After baseball, he ran a bar, was a beer and wine sales rep, and eventually had a Pepperidge Farm franchise.

Two of the sources: Obituary of Hal Dues and Hal Dues biography.