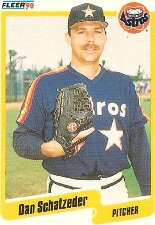 Dan Schatzeder is the top major league player to come out of the University of Denver. For a pitcher, he actually knew how to hit, finishing his career with a .240 average and 29 RBI. He had a 79 OPS+. In 1986, he was used regularly as a pinch-hitter by the Montreal Expos and Philadelphia Phillies, one of the few relief pitchers to have had this experience.