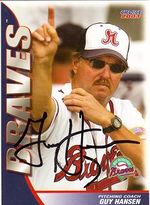 Pitcher Guy Hansen played college ball at UCLA alongside future big leaguer Chris Chambliss. There he set an NCAA record with 11 consecutive strikeouts. After college, he was selected by the Kansas City Royals in the 44th round of the 1969 amateur draft and played four seasons in their organization.

Following his pro career, Hansen was pitching coach at Pepperdine University in 1975 and 1976. He was with the Major League Scouting Bureau from 1976 to 1980 and then was an area scout for the Royals from 1981 to 1983, signing Bret Saberhagen, Kevin Appier and Cecil Fielder. Hansen also served as pitching coach of the Butte Copper Kings in 1983. He returned to his alma mater, UCLA, as their pitching coach in 1984 and 1985.