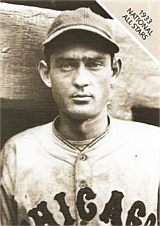 "My first baseball cash came from a game in Prairie. Papa got me up at six and I walked 25 miles to pitch a 3 p.m. game. They gave me $1.25. I gave it all to Momma and she was excited as I. A month later, I caught a train to Shannon, rode it to Boonville for a game. I won it, 3-2, and they passed the hat for me. Nickels, dimes and pennies. Papa met me at the station in our horse and buggy. I said, 'Daddy, I have all the money in the world.' We dumped out the flour sack and we had $98. Boy, I was proud to hand it to them. It was more than my family had in four years!" - Guy Bush, story reprinted on the back of a 1988 Conlon World Wide Sports National All-Stars trading card 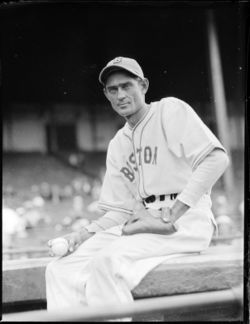 "The Mississippi Mudcat" Guy Bush was a stalwart of the Chicago Cubs pitching staff for a good majority of the 1920s and 1930s. With the Pittsburgh Pirates, he surrendered the final two home runs in the storied career of Babe Ruth.

Following his playing days, Guy managed the Battle Creek Belles of the AAGPBL from 1951 to 1952. He died of cardiac arrest in 1985.