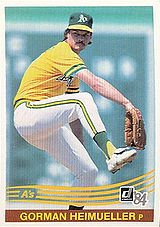 Gorman Heimueller pitched briefly in the majors with the Oakland Athletics and later was a minor league coach.

Born in California, Heimueller attended Cal Poly, San Luis Obispo, where he was a teammate of Ozzie Smith, but went undrafted after graduation. He briefly played semi-pro ball before being signed by the San Francisco Giants and making his pro debut with the Cedar Rapids Giants in 1977. After spending the next three years at the AA level, he was released by San Francisco at the end of spring training in 1981.

Signed by the A's less than two weeks after being let go by the Giants, Heimueller split the 1981 campaign between the West Haven A's and the Tacoma Tigers, posting a career-best 12 wins to go along with a 2.73 ERA. He reached the majors with Oakland in July 1983 and remained the team's rotation for the rest of the season, going 3-5 with a 4.41 ERA in 16 outings. However, he spent most of 1984 back with AAA Tacoma, posting a 6.14 ERA in 6 big league outings.

Heimueller became a free agent after the 1984 season. He moved on to the Minnesota Twins organization for two seasons but never returned to the majors.