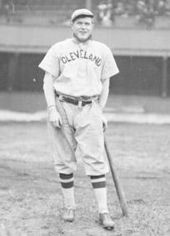 Glenn Liebhardt pitched four years in the majors for the Cleveland Naps, posting good ERA's in the first three of the years. He won 18 games in 1906 and his ERA was sixth in the league. With the Memphis Egyptians of the Southern Association in 1906, he completed 45 of 46 starts including 40 consecutively, to set a minor league record that is still standing. The only time he failed to complete a game was because he was ejected. He made his major league debut with the Naps at the tail end of that season.

With the Naps, he was three years younger than teammate and fellow pitcher Addie Joss.

He was with Minneapolis for part of the 1913 season.

His son Glenn Liebhardt also pitched in the American League.

In addition to his exploits with Memphis, Liebhardt was an exceptional pitcher with the Columbus Senators of the American Association, leading the club in wins in 1910 (23) and 1911 (19). The record on this site shows Liebhardt allowed only five bases on balls in 1911, however, according to independent researcher Chris Gallutia, Liebhardt actually allowed 82 bases on balls that year. [1]