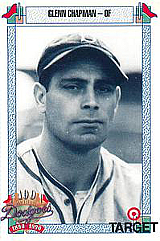 Glenn Chapman played one season in the majors, seeing action in 67 games in the outfield and at second base for the 1934 Brooklyn Dodgers. The Dodgers were managed by Casey Stengel, in his first year as a major league manager, and since Chapman had come from Indianapolis of the American Association, it is likely that Stengel, a former American Association manager, knew Chapman's work. Chapman hit .280/.330/.387 as a backup on a team that hit .281. He played for Montreal in 1935 and managed at Grand Forks in 1946.