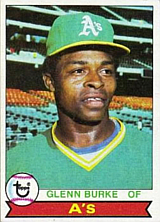 "They can't ever say now that a gay man can't play in the majors, because I'm a gay man and I made it." - Glenn Burke

Glenn Burke was the first major leaguer to come out to as gay during his professional career as well as the first to publicly acknowledge his orientation. Additionally, he is credited with inventing the high five.

Glenn was a star basketball and baseball player at Berkeley High School. Compared to Willie Mays by an assistant coach, he tore through the Los Angeles Dodgers farm system after being taken as a 17th rounder in 1972. He only appeared in 4 major league seasons, with his most notable year coming in 1977, when he was the fourth outfielder on a Dodger team that went to the World Series. He started the first game of that Fall Classic, batting sixth, and went 1 for 3 with a single. He did not have much hope of dislodging the three regular outfielders - Dusty Baker, Reggie Smith, and Rick Monday were still strong contributors. Burke was 24, one year older than the fifth outfielder, John Hale. By the middle of 1978, Burke had been flipped to Oakland for Billy North, seeing time in two more big league seasons. He injured his knee in the spring of 1980 and spent his final season in the A's minor league system.

Burke's sexual orientation became public knowledge following an interview with Inside Sports magazine in 1982. His homosexuality had been known to teammates previously, and some of them made life hard for Burke in the majors. In particular, A's manager Billy Martin reportedly greeted him with a slur when he took the helm of the team in spring training in 1980. Glenn lived in the Castro district of San Francisco for a while. He later ran into difficulties with substance abuse, spent time in jail, became homeless and died of complications of AIDS in 1995. The Athletics gave him some financial support towards the end of his life, as he was completely destitute. A documentary about his life, entitled Out. The Glenn Burke Story, was produced in 2010 and aired on various sports channels. He was a posthumous inductee of the National Gay and Lesbian Sports Hall of Fame (as a part of their inaugural class) in 2013 and the Baseball Reliquary Shrine of the Eternals in 2015.