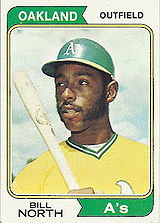 Known for his speed and defense, outfielder Billy North played eleven years in the majors, most notably with the Oakland A's in the 1970s.

North came up with the Chicago Cubs in 1971 but failed to demonstrate that he could hit big league pitching for that team. Dealt to the Oakland A's in 1973, North became one of the American League's premier base stealers. He missed the 1973 postseason because of injury, but played for the World Series-winning 1974 Oakland Athletics He swiped 75 bases in 1976.

North was the regular center fielder for the Los Angeles Dodgers in 1978, after coming over in mid-May in a trade for Glenn Burke; he returned to the World Series that year, this time on the losing side. His World Series batting record was a meager 2 for 25 (.080) with 3 walks. He finished his career with three seasons with the San Francisco Giants, being released at the conclusion of the 1981 strike.

He has been in financial services since he left baseball.