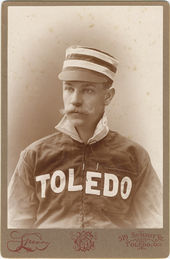 Gil Hatfield was a 30-year-old rookie who played 8 years in the majors from 1885 to 1895. He was most notably a 36-year-old shortstop on the Washington Statesmen in 1891, leading the team in games played, at-bats, runs scored, and hits, with a .256 batting average that was 5 points higher than the team average of .251. At the time, he was the second oldest player in the league.

He appeared in almost as many games at third base as he did at shortstop, and also pitched in 13 games, with a record of 3-5.he also umpired one National League game in 1889.

He was the younger brother of John Hatfield, who had played many years earlier. John's major league career ended in 1876, while Gil's started in 1885 and ended in 1895.

He was also known as a skillful hunter and fisherman. In the middle 1890s he inherited a large sum of money.

"Gil Hatfield at the age of 47 is playing second base . . . and playing well." - Sporting Life of July 15, 1899 about Gil Hatfield, who was actually 44 but nevertheless attracting attention for his good performance with the New London team at an advanced age

This manager's article is missing a managerial chart. To make this person's article more complete, one should be added.
Retrieved from "https://www.baseball-reference.com/bpv/index.php?title=Gil_Hatfield&oldid=1000540"
Categories: