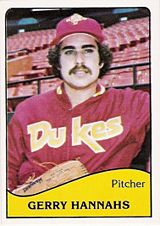 Gerry Hannahs and Andre Dawson both broke into the majors with the Montreal Expos in 1976. The two had been teammates with the AA Quebec Metros that season, when Hannahs went 20-6 with a 2.39 ERA. He is the only minor leaguer in Expos history to have a 20-win season; only Ross Grimsley managed the feat at the major league level, in 1978.

Hannahs was with the Expos in 1976 and 1977, making a few starts in September the first year when he added a couple of wins to his season's total, then earning a spot in the starting rotation at the beginning of the second. He is the first Expo to win a game in Olympic Stadium. He was sent down to the minors after struggling in the early going, putting up a mark of 1-5, 4.86 in 8 games. He was traded to the Los Angeles Dodgers along with Larry Landreth in return for veteran reliever Mike Garman at the trading deadline in 1978. He was in one game with the pennant-winning Dodgers in 1978 and his last major league season was with them in 1979.

His cousin, Ted Hannahs, is a former PBA touring pro who won three titles in the 1980s.