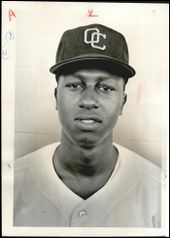 George Williams played three seasons in the major leagues, accumulating a total of 59 games. Most of his appearances were with the 1964 Kansas City Athletics where he was six years younger than teammate Rocky Colavito. George was primarily a second baseman in the big leagues.

George was born in Detroit, MI and died there nearly 70 years later. He started in the low minors in 1958 at age 18 in the Philadelphia Phillies organization, and hit .361 that first year. He moved up the organization and notably hit .338/.415/.501 in 1960 with the Des Moines Demons. The next year he split his time between the 1961 Phillies, for whom he played 17 games and hit .250, and the Dallas-Fort Worth Rangers, with whom he played 111 games. After the season he was drafted away in the expansion draft to the Houston Colt .45s organization.

He came up to the big league Houston team for five games in September, hitting .375, but also spent some of the season with the Oklahoma City 89ers. Since he played 30 games with them, it is likely he was injured during much of the season. He then spent all of 1963 with Oklahoma City, appearing in 158 games, hitting 37 doubles, 12 triples and 19 home runs.

George was traded by Houston to the 1963 Cardinals in October, and then drafted away in the Rule 5 Draft in December by the Kansas City Athletics. He played in 37 games with the 1964 Athletics, all in the first half of the season. He started slowly with the bat, but got 14 hits in his last ten games with the Athletics. He was then returned (as a draft pick) to the 1964 Cardinals, played nine games in the minors in their organization, and spent 59 games with the Indianapolis Indians of the Chicago White Sox organization. In April 1965 he was traded to the San Francisco Giants for Moose Stubing. He was still only 25 years old.

Williams spent the next four years at the AAA level in the Giants' organization, never coming to the majors again. His best year was 1966, when he hit .270 with 9 home runs and 9 stolen bases.