The Gauting Indians are a team in the Bundesliga. Gauting has never won a title (through 2008), most recently finishing seventh in the 2008 German Championship. [1]

The 2009 Indians team won the inaugural edition of the Open international de Rouen tournament, routing the American delegation in the final game 13-2. [2] Two Gauting team members won awards for their performance in the tournament; Matt Vance was the MVP for the series finale, and Eddie Aucoin was given the award for best pitcher. 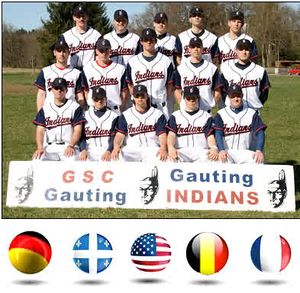 Team that will participate in the Rouen Open tournament, along with flags of the other participating nations.