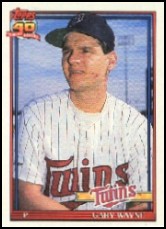 Pitcher Gary Wayne was signed as a 5th round pick in the 1984 amateur draft by the Montreal Expos and scout Bob Oldis. However, he never pitched for the major league Expos, as he was selected by the Minnesota Twins in the 1988 Rule V Draft and spent his first four seasons, from 1989 to 1992, with them as a reliever. He was traded to the Colorado Rockies just before the start of their inaugural season, 1993 and his 65 appearances that year made him their busiest pitcher. He went 5-3, 5.05 as one of many pitchers to find out that pitching in the thin Rocky Mountain air had deleterious effects on his ERA. He finished his career with one season with the Los Angeles Dodgers in 1994.

When Frank Thomas hit his 500th home run, he remembered Gary Wayne as giving up his first home run in the majors. This had come on August 28, 1990, one month into the future Hall of Famer's first season, in a 12-6 loss by the Chicago White Sox against the Twins. It was the only run Wayne gave up in pitching the final three innings of that win and picking up his second career save.