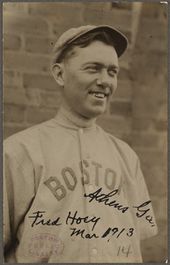 Fred Hoey was a pioneer of sports broadcasting. He was born in Boston, MA in a family whose origins were found in Ireland a couple of generations earlier. His father worked as a clothing cutter and later in the men's department of a large department store. As a youth, Fred played baseball but especially hockey, helping to popularize the game in Boston through various roles, including a seat on the board of the first Boston Ice Hockey League, founded in 1904. In 1905, he became the chief usher at the Huntington Avenue Grounds, home of the Boston Americans.

In 1907, Hoey secured a job as a sportswriter for the Boston Journal, then moved to the Boston Post. He was the chief scorekeeper for the Boston Doves and also covered the team for the Post. By then recognized as a local authority on all sporting matters, in 1914, he began working for the Boston Herald. He covered hockey but was also the paper's baseball editor, covering both of the city's major league teams. In 1927, he became the first full-time announcer to do baseball play-by-play on radio in the Boston area. He announced the home games of both the Red Sox and the Braves on WNAC radio and quickly became very popular. He was working alone, sometimes in tough outdoor conditions, in those pioneering days of broadcasting, not getting his first partner in the booth until 1934. By 1930, his broadcasts were picked up on a network of radio stations throughout New England, giving him a huge audience. That year, he was behind the microphone for the first nationally broadcast baseball games emanating from Boston, a Braves game carried on CBS radio.

In 1931, the Braves honored with a "Fred Hoey Day" between games of a doubleheader against the St. Louis Cardinals that drew a huge crowd of some 30,000 to Braves Field. In 1933, he was given the honor of doing the national broadcast of Games 1 and 5 of the World Series on the CBS network. However, he lost his voice midway through Game 1 - he claimed he had a bad cold, although rumors were that he may have had too much to drink - and had to be subbed and was not able to return for the later game he was scheduled to describe.

Although he remained very popular, he was suddenly fired in 1936, apparently at the behest of advertisers who thought he allowed too many pauses during his broadcasts. Fans clamored for his return, but were not successful. He ended up hosting a sports talk show for a few years and returned to sportswriting until his retirement in 1947. He suffered a stroke in 1949 and was in poor health for the remainder of his life, passing later that year at the age of 64.