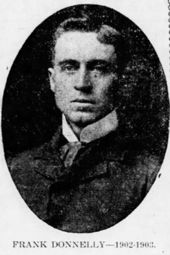 Frank Donnelly had eight games in the majors along with 20 years as a player in the minors and eleven seasons as a minor league manager. He was solely a pitcher in the majors, but for much of his minor league career he was apparently primarily a position player, although statistics are not complete.

With the Chicago Colts, for whom he pitched 7 games in 1893, he had a record of 3-1 and his 2 saves led the team. His WHIP was better than the team average. At age 23, Frank was 18 years younger than player-manager Cap Anson.

In 1910 it was reported that Frank had bought a tobacco farm and planned to settle down in Texas. Source: The Rock Island Argus, June 22, 1910.