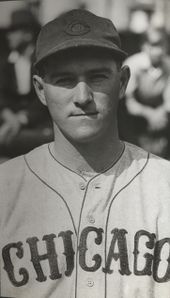 Frank Demaree had a 12-year major league career as an outfielder. He hit .299 lifetime. He was also MVP on a team in the top minors in 1934, after his first full season in the majors.

Demaree came out of the St. Mary's College of California program that sent several players to the majors in the 1930s. He broke in with the Chicago Cubs in 1932, at age 22. He appeared in 23 games, and then was in 2 games in the 1932 World Series, hitting .286. He had not hit a homer in the regular season, but did so in Game 4 of the World Series, off Johnny Allen of the New York Yankees. He was only the second player to hit his first homer in a postseason game, after P Rosy Ryan, who had done so in the 1924 World Series. A few others have done so since. In 1933, Kiki Cuyler broke his leg in spring training, and Demaree became a regular outfielder. He hit .272 on a team that hit .271.

He was traded to the New York Giants after the 1938 season, and pushed his batting average over .300 in 1939 and 1940. In 1941, he lost his job as a starter, and was claimed off waivers by the Boston Braves. He finished out his career from 1941 to 1944 as a backup with the Braves, the St. Louis Cardinals, and the St. Louis Browns. The Cardinals went to the 1943 World Series, and Demaree got one at-bat in the Series. He was released before the end of the 1944 season, so he did not appear in the 1944 World Series with the Browns.