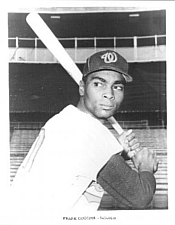 Coggins was essentially finished as a major leaguer, clawing his way back for a 6 game stint with the Chicago Cubs in 1972 to complete his career. He appeared in 13 games in 1973 for the Kintetsu Buffaloes. Although he died in 1994, his death was not reported in baseball circles until 2009.